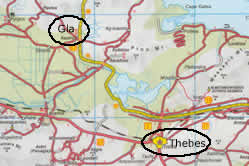 The citadel of Gla, is 17km/17miles northwest of Thebes/Thiva near the village of Kastro and just off the national highway so is very easy to access. If you walk through the village, it is on a side-road across the highway and south a little. The road is sign-posted and the site about 300meters/984feet in, with the entrance on the northeast side. Entry is unrestricted and free.

This enormous fortress was many times larger than Myceneae or Tiryns. It was surrounded up until recent times by Lake Kopais (Kopaida), which was drained in the late 19th century, and was hence an islet up until then. Little is known about it, though it has been conjectured to have been an outpost of the Minyans (a people who came, according to some, from the coast of Thessaly-according to others, from Egypt). They controlled the area across Boeotia (in Greek Vo-itia) and Thebes itself for a time. See more about the Minyans in Orchomenos. 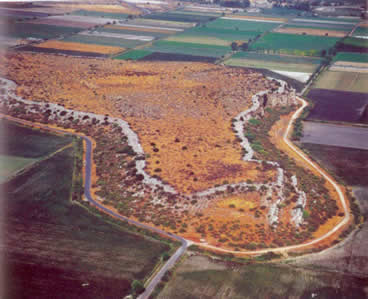 Gla occupies a rocky plateau enclosed by a wall built in 14th-13th century BC, which follows shape of the rock and runs along its steep edge. The walls were over 5meter/16feet thick and 2-8km in length (1.24-4.98miles) and had four gates, also 5meters high in places. There are square towers framing the northeast gate. The path to the right leads up to the highest point of the plateau (70meters/230feet) above the present marshy plain where rice,cotton, and grains are now cultivated and some animals grazed.

The lake was drained by Scots and French engineers and a network of canals built to channel the water south towards the River Kifissos which flows into Lake Iliki and Lake Parlimni, the drainage reclaiming 200 sq km/77sq miles of land over a period of years. The Greek government claimed the land in 1952, but before that it was under a British company.

The citadel was excavated during the late 19th century by the French School of Archaeology in Athens, and unearthed a palace against the north wall with two megara (throne rooms) and storerooms. The palace was not built in Classic Mycenaean form, however, something that has puzzled researchers, nor was its function has not been clear to them.

The four gates were cleared of debris in 1956-60 by the Greek Archaeological Service under Threpsidadhis and work continued since 1979 by Prof. Spiros Iakovidhis. The South (or Royal) Gate had double bronze-faced doors.

The Agora (market-place) is also walled, and is vast in size. No organized tours visit this site.