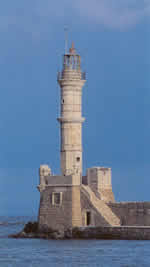 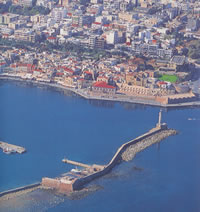 One of the most visible landmarks of Hania's Outer Harbor (not the ferry harbor, which is at Souda Bay, 10km to the east) is the Mosque of the Janissaries with its large dome, built in 1645, when Hania fell to the Ottoman Turks. Unfortunately, when the mosque was restored, concrete was used for the dome. Near it is the local handicraft cooperative (open Mon0Sat 9:30am-10:30pm). It is this harbor which is one of the most photographed places in Greece (looking on it from the sea), with its Venetian and Turkish houses in the background, and the waterfront lined with tavernas, shops and stalls.

On the other end of the harbor from the mosque is the Naval Museum (open Tues-Sun 9am-4pm; 2euros), Though some of it is mostly of interest to those with a passion for naval battles and the like, the section on the Battle of Crete in 1941 is both fascinating and saddening (as it brings home the suffering endured here under the Nazis). 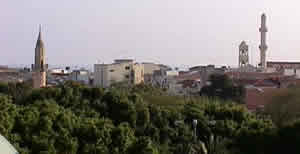 Outside are the old fortifications, from which great views are to be enjoyed. In 1913, when Crete finally threw off the Ottoman yoke, the Greek flag was first raised here. This area is known as the Firkas. Check to see if they are still presenting Greek traditional dancing (in costumes) on Monday and Thursday evenings.

Of the remaining old city walls, the most intact are beyond hotel built on top of the fortifications, past which you can follow the walls on the inner side and see some of the best of old Hania, with narrow lanes and old Venetian houses. In between Theotokopoulou (a fine old street) and the waterfront at the bottom of Moschon is the beautiful Renieri Gate.