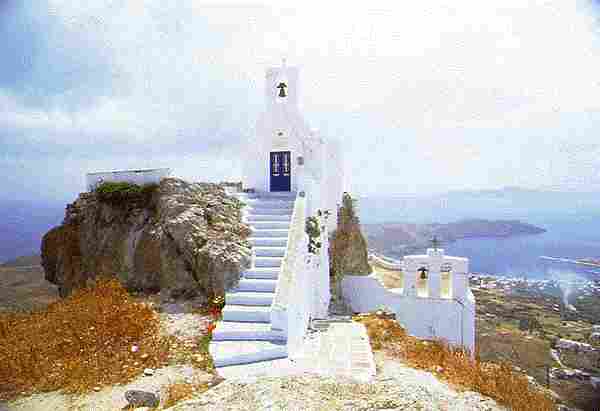 Livadi, set in a beautiful, well-protected, wide semicircular bay boasts Serifos most amenities with quite a few rooms to let and several hotels. Nightlife is most apparent in the port of Livadi. You can make out the town and dock below in the picture at left. There's a sizeable yacht marina in Livadi.

The further along the long combination sand and pebble beach you go, the less expensive the rooms and tavernas become. Within easy walking distance from Livadi is the crowded Livadakia beach. Thirty minutes south of Livadi is the Karavi Beach, which is popular with nudists. To the east is the beach at Lia.

High on the hill 6km above stands the dazzling white Hora, (pop. 400) one of the prettiest Cycladic island towns. You can take the bus or climb ancient stairs. Its narrow alleyways and serpentine paths were made purposefully confusing to foil pirate attacks. The town hall contains a small collection of archeological finds from around the island. It has its own small Venetian Castle, now in ruins. Many of Hora's cube-shaped homes are built of stone taken from the caste. Hora is barren and rocky, but geranium trees grow there, some as much as 12 feet high! In the spring, the rare carnation that grows only on Serifos may be seen in Hora.

The view from the crag that Hora clings to is breathtaking. The the view of Hora from afar is equally charming, with its whitewashed stone.

A 20 minute walk northeast (there's also a road) is Psilli Amos beach, one of the islands' nicest.

The road continues beyond Hora on to Megalo Horio or Big Village which is considered the location of the ancient Serifos capital. It is the center of the old mining district and has a beach below called Megalo Livadi or Big Prairie where the ore used to be loaded for export.

From Megalo Horio the road continues to Koutalas and its 6th Century marble Kastro ths Grias or ''Castle of the Old Lady." Nearby is the Cave of the Cyclops discovered during mining operations. The cave has a small lake and two stalactite chambers (bring your own flashlight). There are two smallish beaches close by, Ganema and Malliadiko. From here you can follow a path back to Livadi.