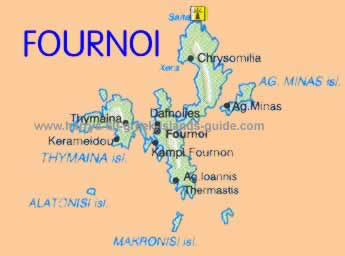 Fourni is a tiny forgotten island between Ikaria and Samos. Its part of its own small archipelago and one of the busiest fishing ports in the Aegean, supplying Athens primarily but leaving plenty for the islanders too and at reasonable prices.

There are ferries twice weekly from Piraeus and every day caique's from Ikaria. The main village called, what else, but Fourni houses about half  of the 1,600 islanders and is a lovely combination of Limani and Platea, i.e. harbor front and central square, the latter of which, in addition to the obligatory Plane tree, has a Hellenistic stone sarcophagus as a focal point.

2 beaches are a short walk to the north of town, Psilli Ammos (small sand) and Kalamos (bamboo). The offshoot hamlet of Chrissomila (Golden apples) has pretty good beaches and a few rooming opportunities and tavernas which make it the Ideal to get away for those able to get by with less frills! Kambi, the islands official capital, to the south of the port is another loosely defined metropolitan area of charm boasting a tree lined beach popular with yachties.