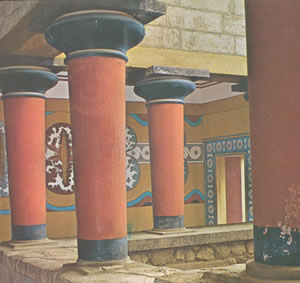 A dark passage leads to the Queen's bathroom in which is found a clay tub that was screened by curtains when in use. Much attention has been focused on the famous 'flushing' toilet, though a bucket was actually used for this. Also much admired is the Drainage System of linked terra cotta pipes running underneath most of the palace, with baffles and overflows to slow down the runoff and prevent flooding. But whether there was sufficient water to service this system and the sumptuous complex is another question.

Up the Grand Stairway to floor above Queen's rooms, you come to what are known as the King's Quarters - Hall of the Royal Guard with shield patterns on walls,and off of this the Hall of the Double Axes (this symbol carved into every block of masonry) with both a personal chamber and a second one for dealing with the public.

At the top of the Grand Stairway, you enter the Central Court (a feature of all Minoan palaces)-now open, though once enclosed by walls of surrounding buildings. On the far side of the courtyard is the northwest entrance to the Throne Room. A worn stone throne shaped for human hindquarters sits against the wall of a small chamber with stone benches suggesting that royal councils were held there. The fresco of two griffins to be seen there was actually found on the ground. This room may have been the seat of a priestess rather than a ruler and was perhaps converted into a throne room later by invading Mycenaean's. It is now closed off by a wooden gate. 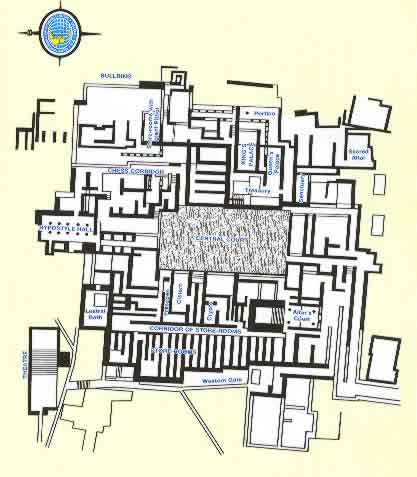 The Royal Road to the north of the complex is claimed to be the oldest road in Europe. At one time it may have traversed the island, but ends now after a three hundred meters.