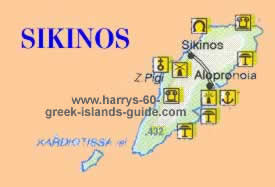 This little island has a population of only 300, and was the last Greek island of any size where small launches were used to take passengers from ferry to shore.

Only in the late 1980s was a bus available to take passengers from the port up to the village. Sikinos is a nice place to escape the hordes, but not only that. It's also a place where farming and fishing are still the main trades, it has a couple of beautiful hill villages, some interesting fauna, and good walking paths.

Many Greeks from the island return to visit in August. The port of Alopronia/Skala has an increasing number of tourist rooms, including some very inexpensive ones, though many camp out on the town beach under the tamarisk trees. There are also three tavernas, a bar, and a music café.

There's a regular bus up to Hora, over which sits the ruin of a fortified 18th century monastery with icons by a famed master. 18th century stone mansions form the square of Kastro with their backs facing out: there's a small chapel within the square. A folk museum in the town displays an old olive press. To the south is the Moni Episkopi (Episkopi Monastery), which began as a 3rd century mausoleum , was converted into a Byzantine church (7th century), and rebuilt in the 17th century after an earthquake destroyed it. Palaiokastro (Old Castle) is on the north tip of the island, (reachable in 1 ½ hours by path from Hora) the sandy beaches of Malta, Aghios Yeorghios and Aghios Nikolaos all nearby. Aghios Pandelimonas, the prettiest and most sheltered beach is south of Alopronia an hour on a trail , and also reachable in summer via kaiki (caique).